I was able to spend Easter weekend down at my parent's home in Mound, and it was a great weekend filled with fun- competitive Pictionary, a ping-pong tournament, climbing, Peeps, and a special project that turned out way better than I expected. 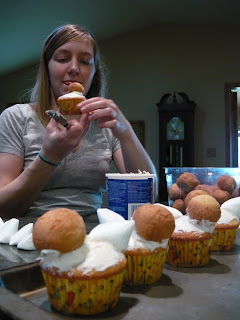 I found a sweet book at work called "What's New, Cupcake?" filled with great cupcake-decorating recipes that used tasty stuff like donut holes and regular frosting to make fun and creative baked goods. Inspired, I bought the book and decided to attempt the duck recipe for my contribution to the family get together on Sunday. 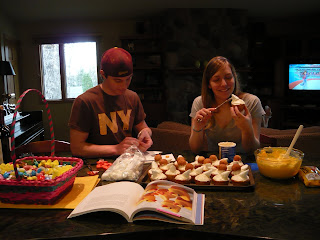 It was a ton of fun to make, and although it took awhile to do each one, seeing the stages develop was really cool. For example, the heads were donut holes that had frosting to stick them to the cupcake, and the tails were marshmallows cut in half diagonally. Beaks and feet were shaped out of orange Starbursts. 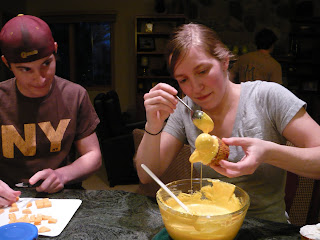 The concoction was dipped in yellow frosting, which was the only difficult and worrisome part. Luckily there was only one mild decapitation, which was easily fixed with more frosting on the base (that one went to a young cousin, who can handle the extra sugar!).
The end result? 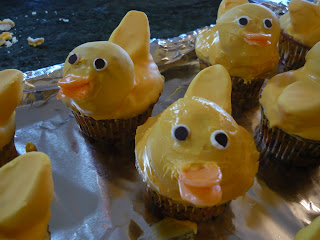 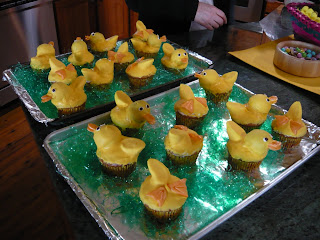 We had 12 full body ducks and 8 where it looks like they went head first in the water, with just their butts and little feet in the air. Even though they were a little finicky and took awhile, I'm really excited with how they turned out, and they were a hit at Easter with my family!
Will I make them again? Probably not, but they were easy enough that it's a 'probably'. There's plenty of other creations in the book to try first.
On the way back up to Duluth, a quick stop at Taylors Falls satisfied the climbing itch, with my highest Trad lead grading thus far- a 5.7 (yeah, pretty easy, but trad lead is a little harrowing) then I worked a 5.10 and played around on a 5.12 (getting farther than I thought- the crux was the only place that stumped me!). No pictures, but since there were only two of us it was probably a good thing. :)
Lots of homework and researching this week, but hopefully squeezing the end of one project in plus maybe beginning another. Off to pour some coffee and get started on those- good night everyone, and good luck. ;)
Posted by Katie at 7:32 PM