All of the February

February is going by fast.
I think that the more things I agreed to do, the quicker the time goes (probably because there's just less time in general to get everything done).
Everyday things I've been doing- school, grading, lesson planning, teaching dance, trying to keep my house clean and cats entertained, and hanging out with my guy on the weekends.
Extra cool things I've been doing:
My office hours on Mondays, Wednesdays, and Fridays finish at 1 pm, so on my way home from work, I stop at Cross Country ski trail that's about 3 minutes from work to get a 5-7K classic ski in. 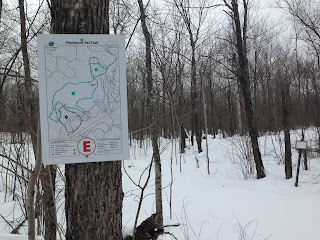 It's a great time for me to get outside, wind down a bit, and get a tiny bit of cardio.  I'm officially in the get-rid-of-winter-chubbs mode with climbing training starting again and a trip to Florida in a couple of months.  I'm going to try to start upping my climbing time from zero times a week (had a bit of a break there when there was so much dance going on) to 3-4 times a week.  I have lofty goals for this summer, and I need to be in shape to pull them off!
P took home the win on Valentine's Day this year.  He kept his plan for our dinner out a surprise until I walked in the restaurant.  Turns out he made reservations at a local amazing seafood place in the cities, and he pre-ordered us a 4 course lobster meal with a bottle of wine. 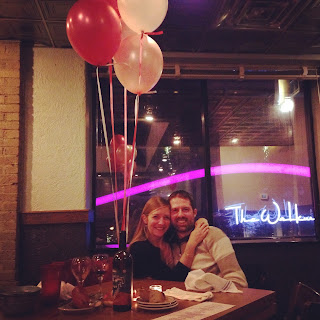 Major win and points for this guy.  We ended up getting a little room all to ourselves, and I felt really happy and spoiled!
That same weekend, I met a bunch of amazing dancers from my studio to see the touring Broadway production of Newsies! 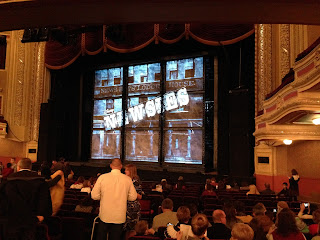 This is quite possibly one of my favorite musicals ever, which I think says a lot for how much fun and how awesome it is. :) I have to admit, though- one of the reasons that I enjoyed it so much was because I was surrounded by this group of lovely ladies that were also excited to see it: 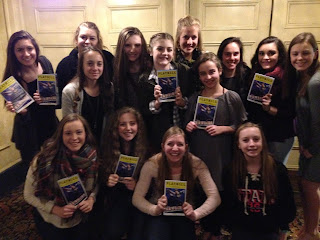 It's so cool to share my excitement for seeing this show with all these girls, especially since most of the them danced one of the songs a few years ago as one of my tap dances!  Seeing the show got me all excited about it again, and made me think about my possible dances for next year... :)
Next weekend is the Duluth Ice and Mixed Climbing Festival, so I'm working with the Duluth Climber's Coalition the rest of this week to get that ready on top of getting back to dance after a week (sort of) off.
Lots of awesomeness going on, and (once in awhile), I even have time to catch my breath... ;)
Posted by Katie at 1:34 PM No comments:

I can finally retire Jared Flood's Scrollwork Pattern.  I used it to knit 4 hats for friends (my Venga Las Chicas series) as well as a matching set for myself, which I've dubbed the Winter Winds Cowl and Hat.  After 5 hats and a cowl, I'm done with this pattern for the time being.
Though, to be fair, I'm really really fast and good at it now... :) 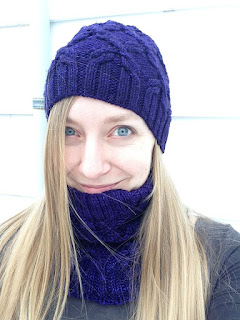 Pattern: Jared Flood's Scrollwork from Wool People vol. 4 (link goes to Ravelry pattern page)
Yarn: Malabrigo Rios in the adeptly named "Purple Mystery"
Needles: Both sizes 4 and 7 for the hat and the cowl, all bamboo.

Timeframe: Sept 24th, 2015-January 28th, 2016.  I actually finished the hat in like two weeks, then didn't cast on for the cowl until after Christmas knitting was finished. 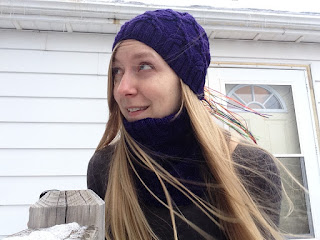 Mods: I only did 8 pattern repeats on the cowl, so I cast on 112 stitches instead of what the pattern called for.  I like it better- it fits well under jackets, and I personally like having a cowl close to my face when it's not an infinity scarf.
Worst Part: By the time I got to knitting this hat for myself, I wasn't as psyched about doing the pattern yet again as I thought I would be.
Best Part: Finally finishing a matching winter set for myself! 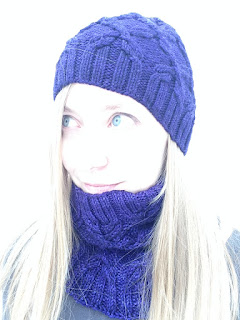 (Weird lighting picture so you can see how pretty the pattern is!)
I'm really happy to FINALLY finish this set.  It's an involved enough knit that I can't bring it with me places easily, and it takes enough concentration that I can't just have a conversation while making it.
I officially only have a handful of items in my Ravelry queue now.  Two toys- a Sasquatch for a new baby and a Yeti for a baby who is due in the next month- need to be finished quickly.  Those are definitely at-home knits, as I don't feel like dragging a giant bag of stuffing everywhere.
Another at-home only knit is the Ivy League Vest that I would love to finish before the end of the school year.  I was chugging away so well before I got distracted with other knits... oops...
Those are the only real big ones I have currently on needles... weird...
I also started a pair of handwarmers for myself as spring approaches, mostly because I don't have any travel knitting right now.  I have some time in the car this weekend, so hopefully these will get a bit of mileage on them before next week.
I also really want to knit a quick Turn-a-Square hat for BF for Valentine's Day.  I can usually punch one of those out fairly fast, and I think it would be a nice gesture to have a hand-made present for him while it's still winter.
I should actually cast on for that today... right when I get home, especially since spring knitting is beckoning from around the corner...
I'm excited to clear some of these projects out so I can start on others. :)
Posted by Katie at 12:30 PM No comments: