I'm finally getting around to posting about the rest of my trip, so (hopefully) enjoy!
We were all sad to leave the Cinque Terre, but there was a lot of mainland Italy to see. Up next was Bobbio, where the big hit was a traditional 4-course Italian meal! 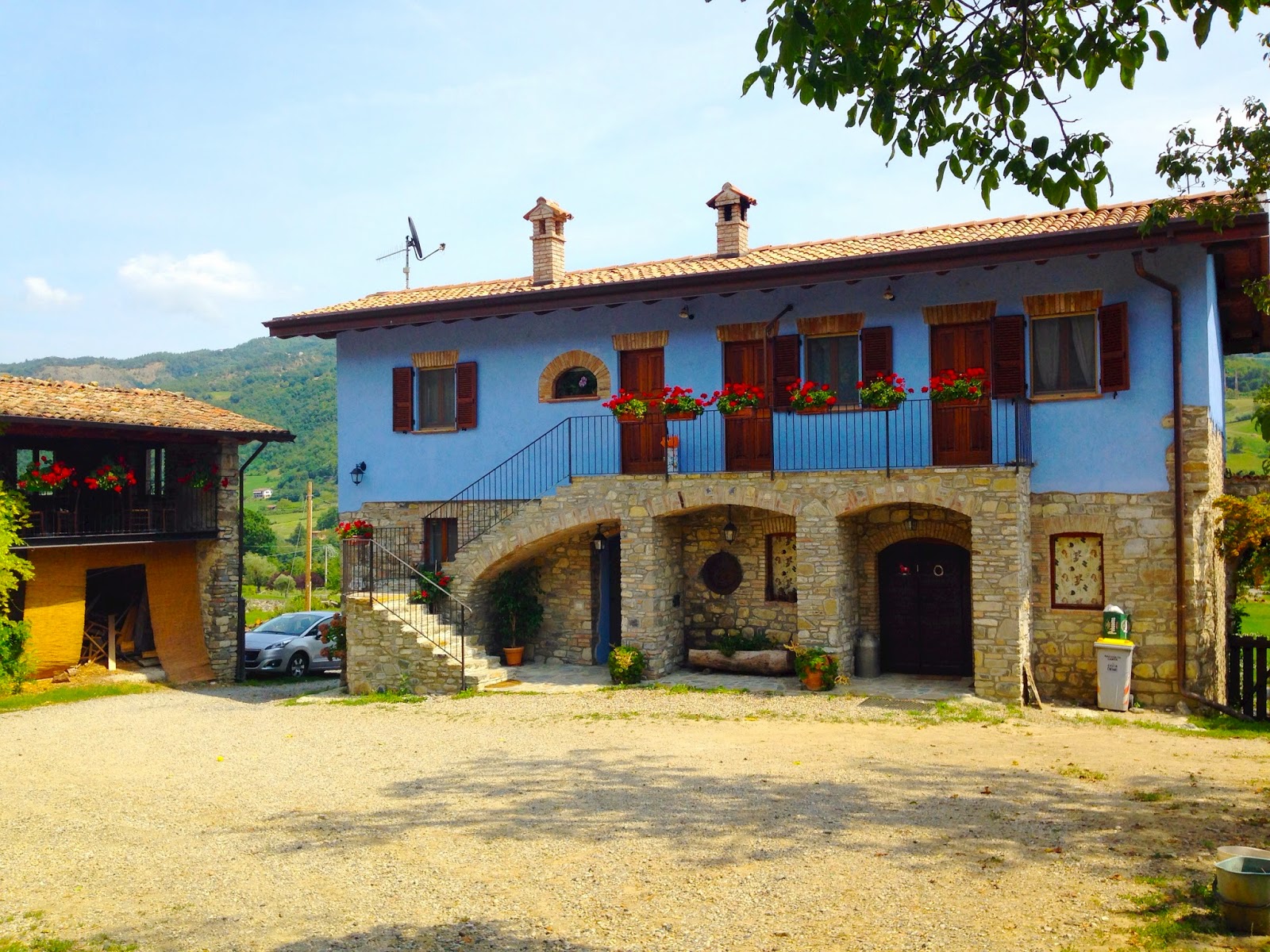 We stayed at an amazing little place that served food that they grew right on the property, and wine where the vineyard was less than 5 miles away. 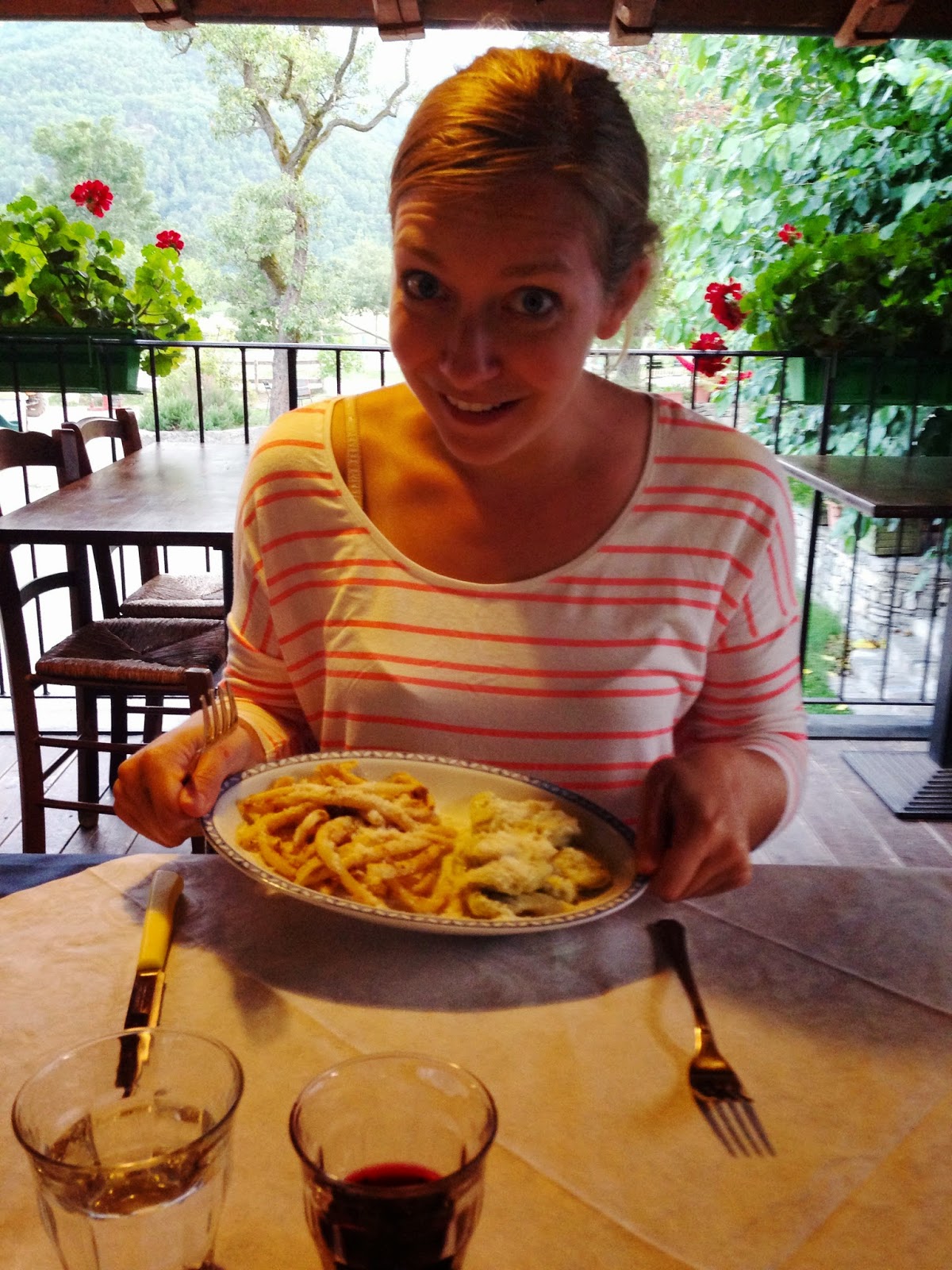 It was an incredible 4 courses of deliciousness- antipasta (appetizer) was a meat and cheese platter with specific fare from the region, followed by another course of 2 different kinds of pasta and sauce, followed by the pasta (main course) of both duck and beef accompanied by a salad made fresh from garden veggies from 20 feet away. 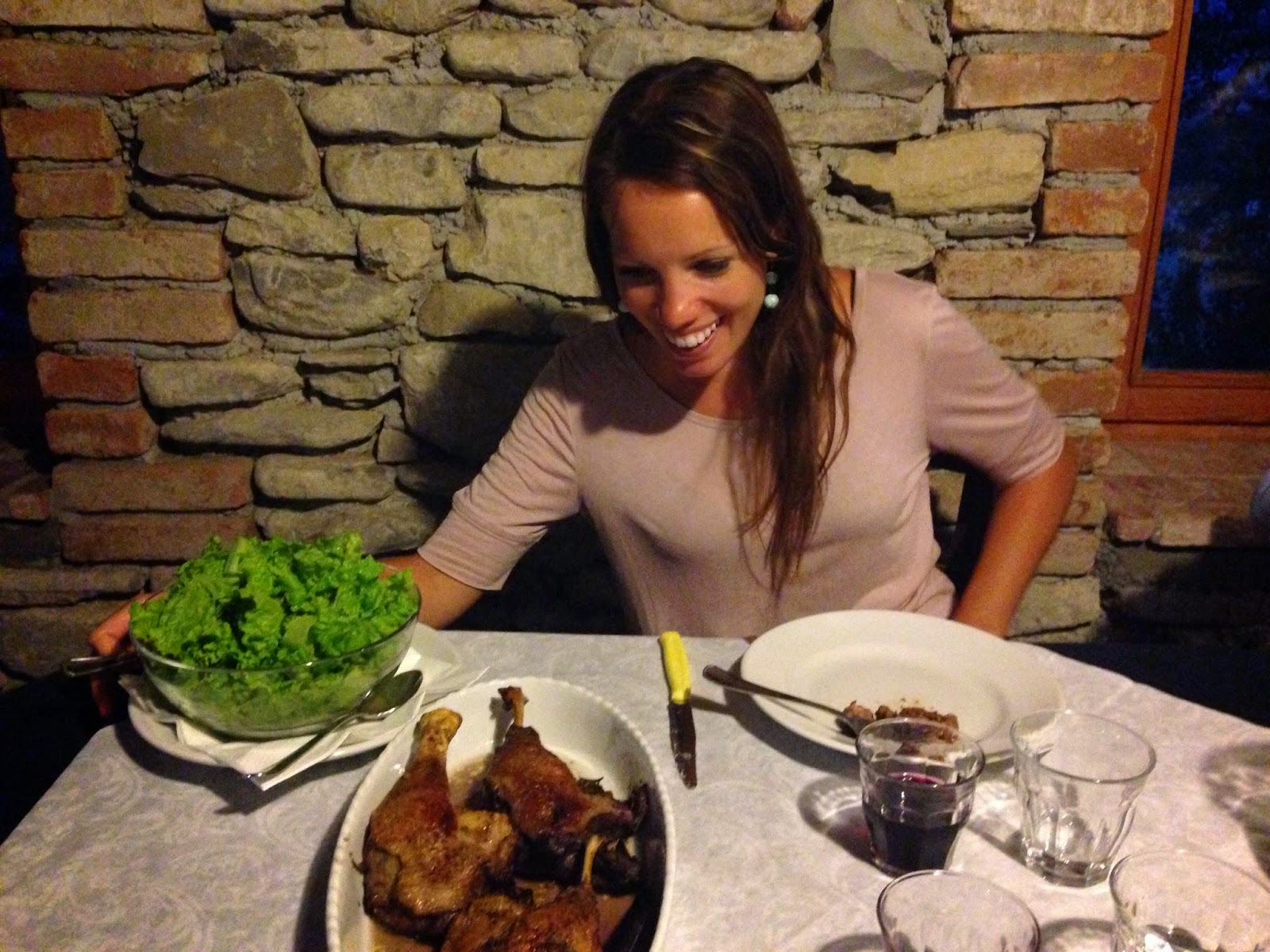 I was full before the meat even came out, but it was so incredibly tasty that I had to keep going (I figured that I would hike it off the next week in the Alps).
Then we were told that dessert was going to be a choice of chocolate mousse or mango something-or-other.  Course 4.  Just in case we weren't full enough already. 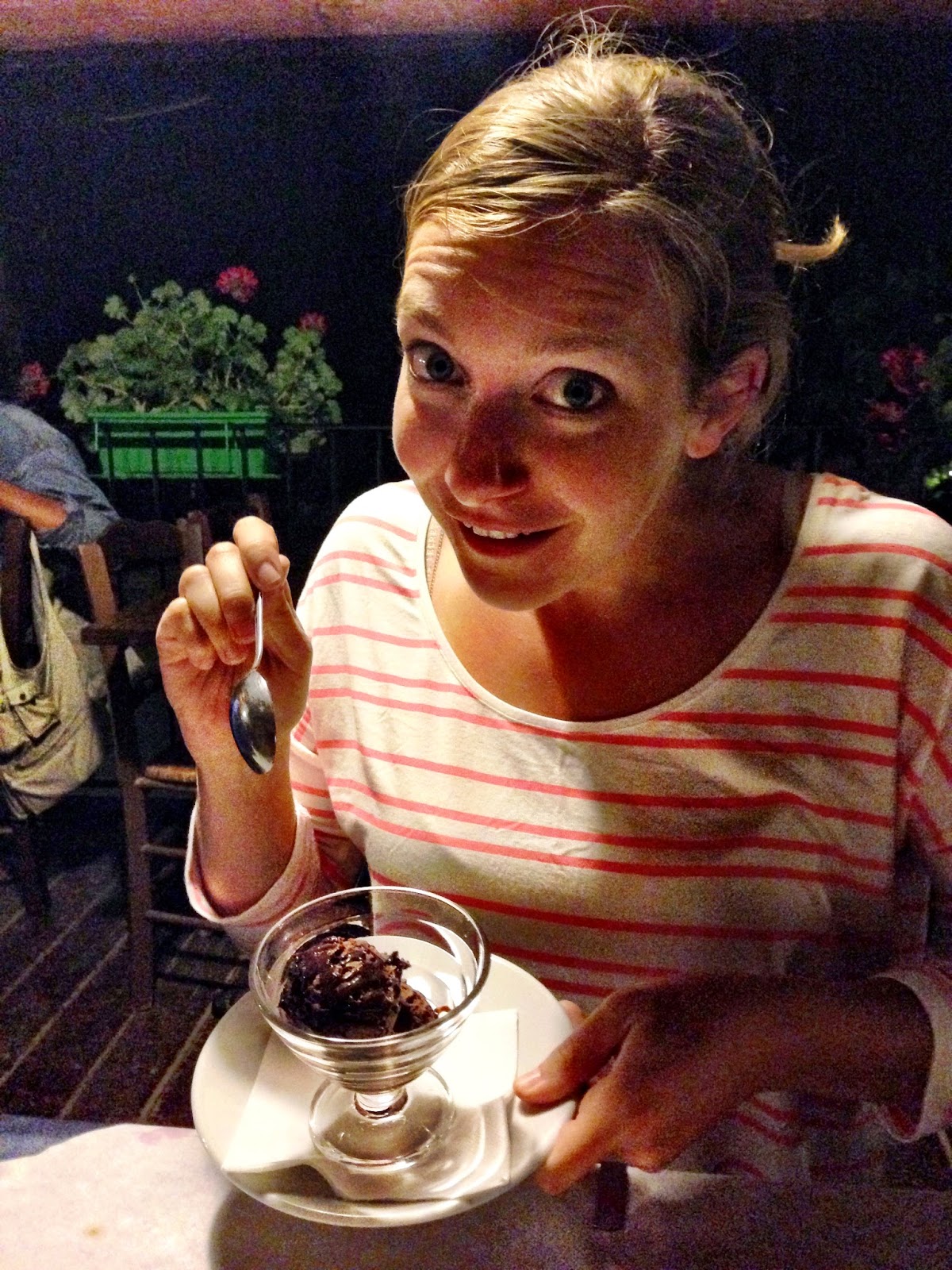 I went with the (fresh) chocolate mousse, which of course went in my special dessert stomach.  Since the other one was beyond full, after all.
Needless to say, I didn't need to really eat the entire next day.
Luckily, there was a lot of other stuff to do- like check out more towns, including Verona (yes- THAT Verona- the one from Shakespeare's Romeo and Juliet!). :) 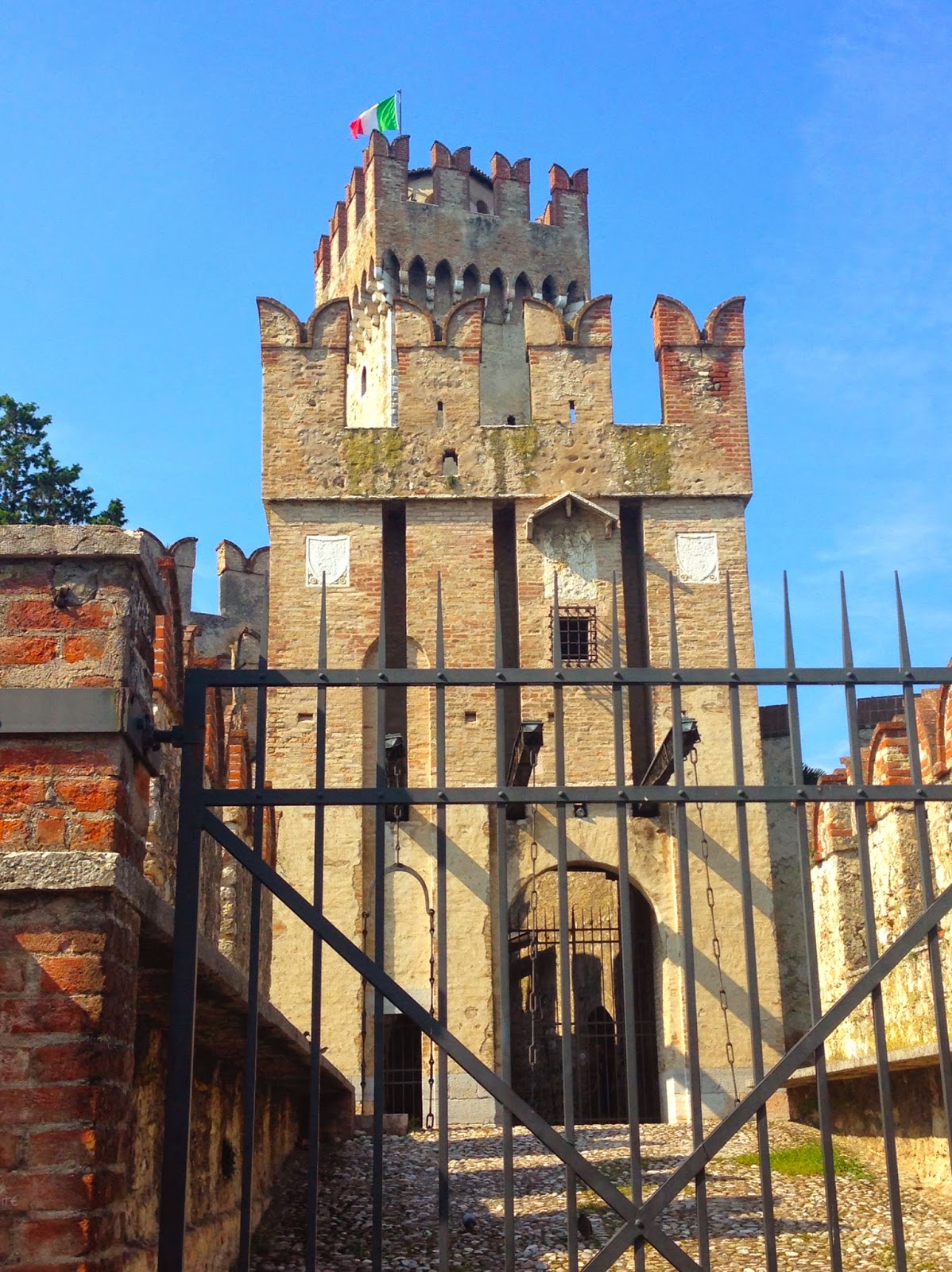 We checked out a castle on the drive to Verona- one surrounded by moats, water, and gorgeous views! 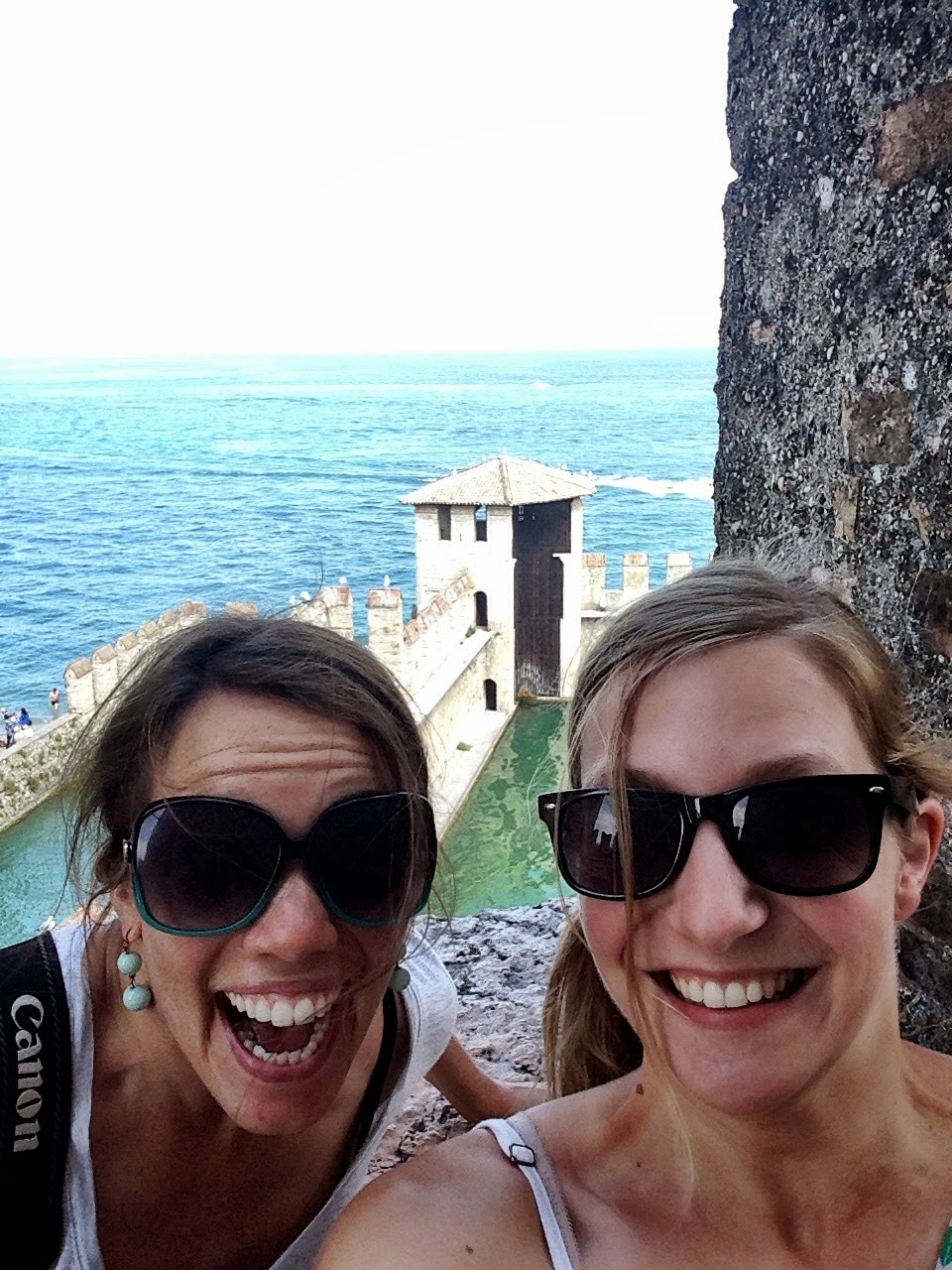 Kendra and I were pretty psyched about it, despite the 90+ degree heat. :)
Verona day had a little bit wilder weather.  We packed our raincoats and headed to check out the numerous burial sites, churches, and Shakespeare-esque attractions! 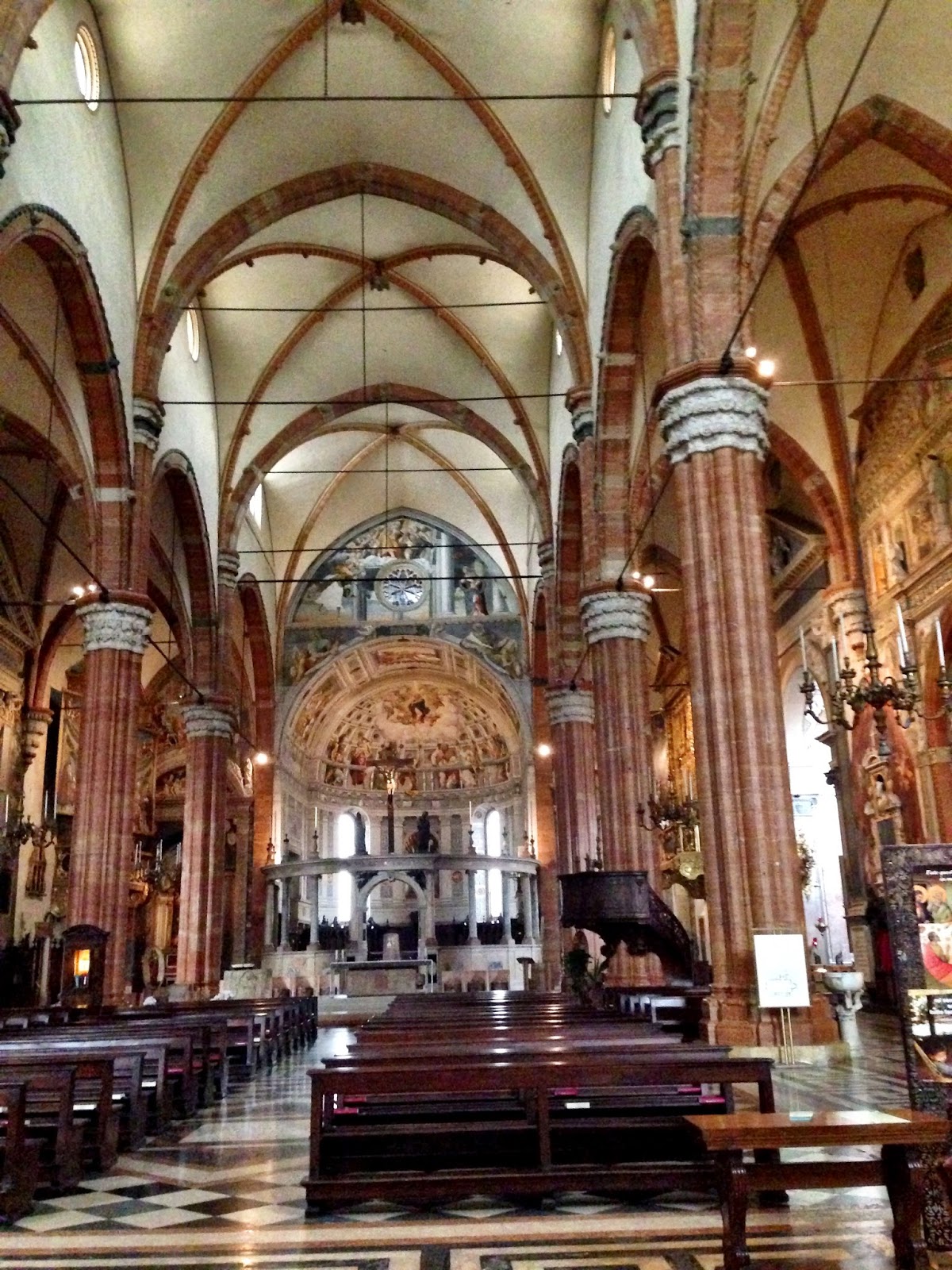 The very first church we visited had barely opened when we arrived to look around, but being early birds had perks.  A guy walked around us to the organ and began practicing Bach's Toccata and Fugue in D minor.  With the early morning gloomy weather and the gigantic, incredibly ornate church, this was probably one of my favorite parts of the day.  Full organ concert in an almost-empty medieval church of one of the most recognizable pieces for organ ever composed??  Hard to beat that kind of concert and ambiance! 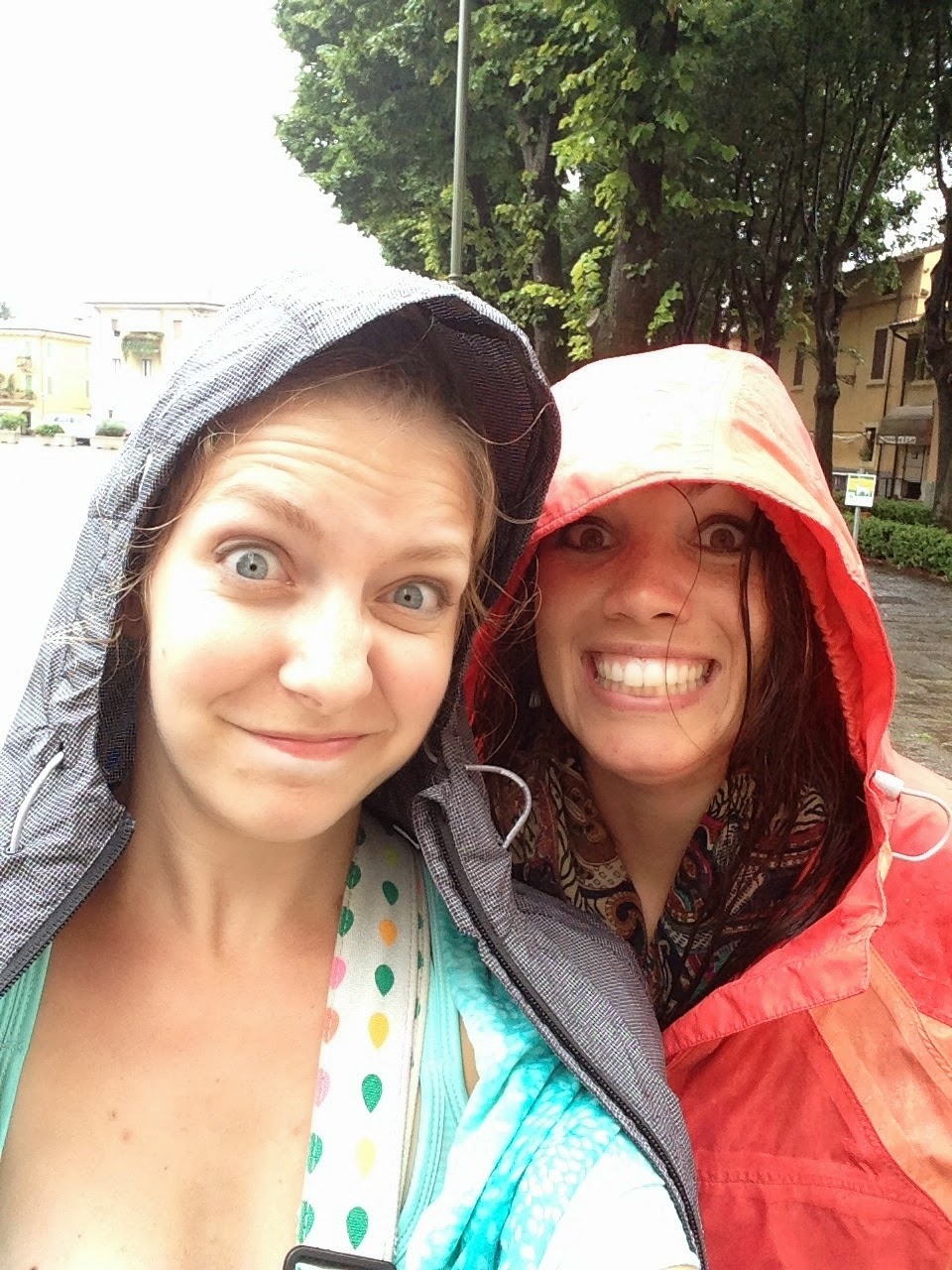 After getting mildly lost while it rained (as you can see, Kendra and I were super excited about it), we stopped at another church that had "4 star doors", as my dad kept reminding us.  They were pretty fantastic, not going to lie, but my favorite part was when my brother, Kendra, and I were talking about the stories behind the doors, and we had Kendra thoroughly convinced that one of the doors (from 1300) really had the story of the Lord of the Rings on it (including what we said was Gandolf, Smeagal, and the full Fellowship on one of the panes).  She truly thought we meant it. 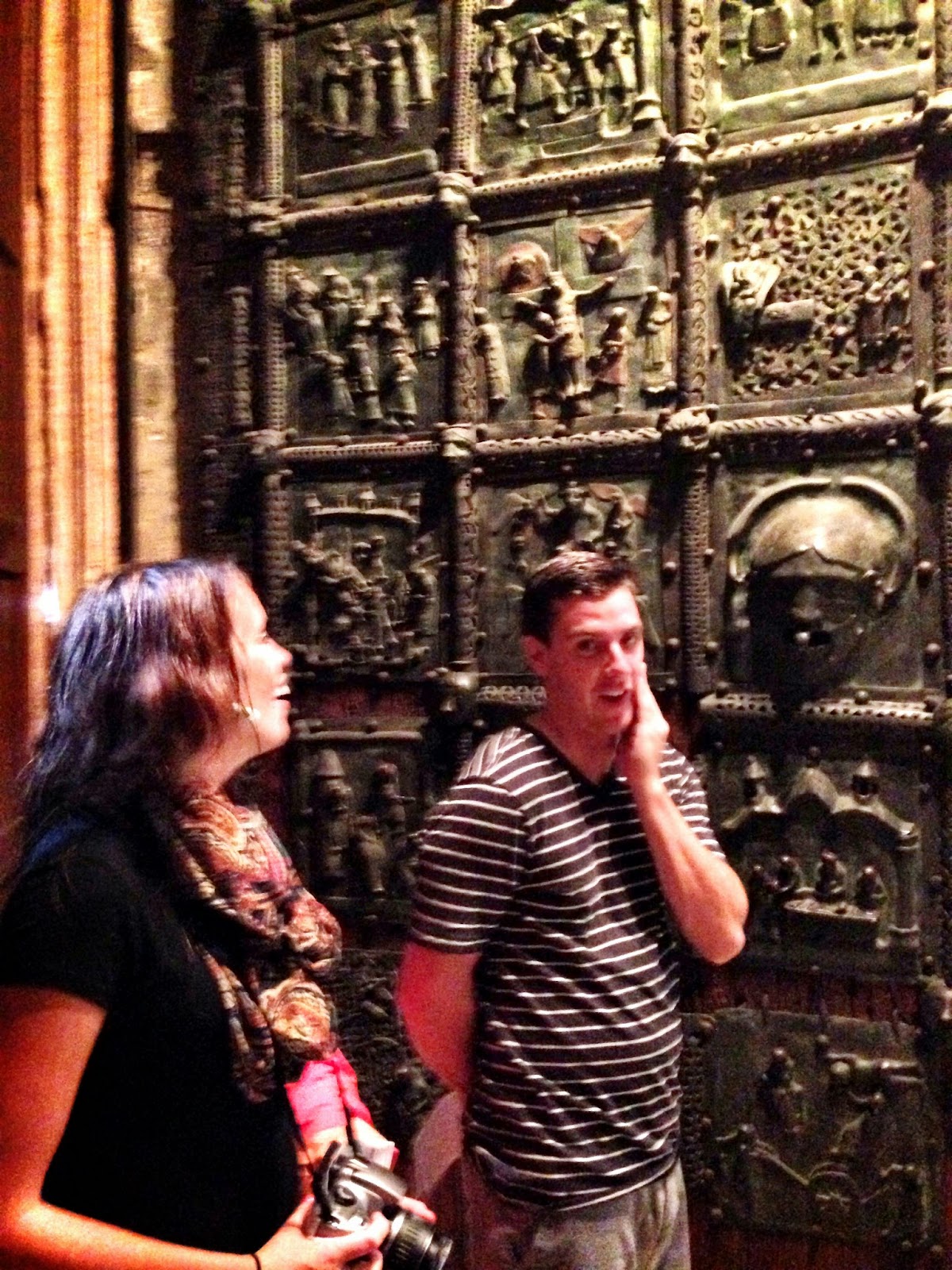 The pic shows Kyle's face when we told her we were kidding, and she stated that she completely believed us.  Kyle couldn't believe we had her fooled... :)
One of the last things we saw was Juliet's house, including the courtyard, her bedroom, numerous costumes from past play productions, and of course... 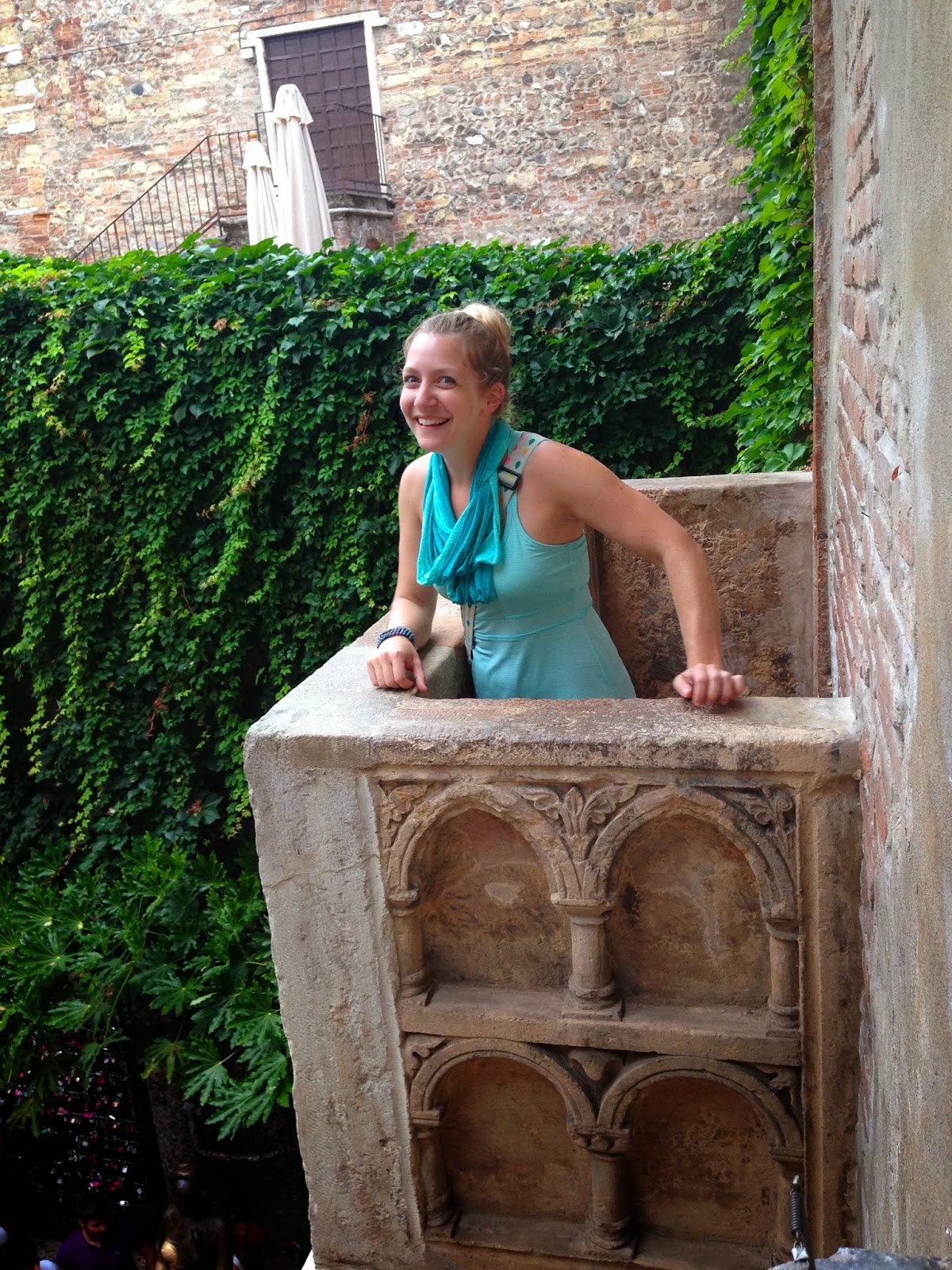 going out on Juliet's balcony!
I was pretty excited to go out on to the actual Juliet Capulet balcony, and after we toured the rest of her house, Kendra and I made sure to drop some love letters in her mailbox asking her for love advice! 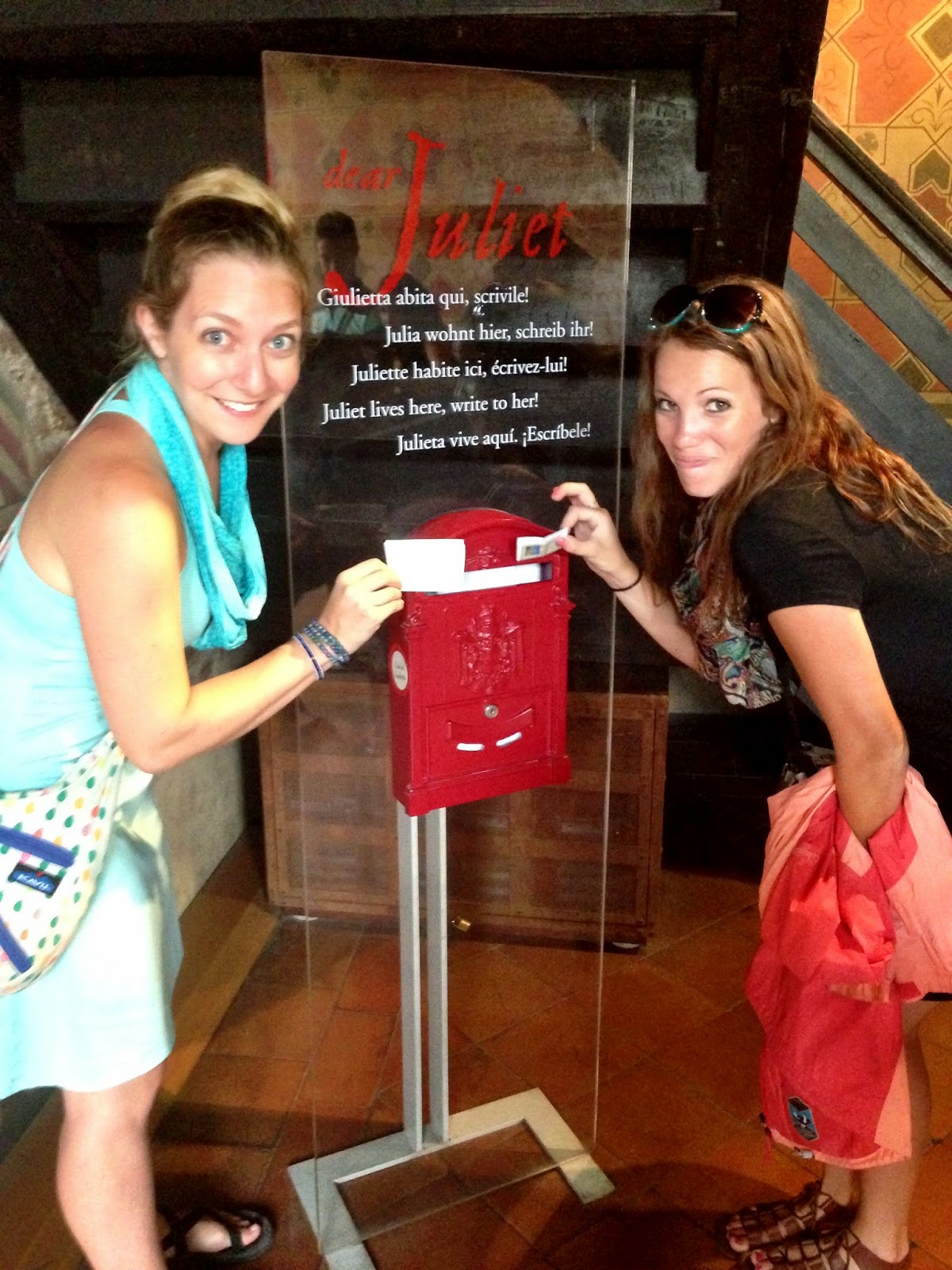 Super cheesy, I know, but as I'm a huge romantic, and I that thought it would be fun. :)
(To be fair, there's an entire movie based on the romanticized view of giving Juliet a letter, but there were waaaaay more people in the courtyard than the movie would have you believe...)
At the end of the week, we headed off to the mountains (be still, my heart)! 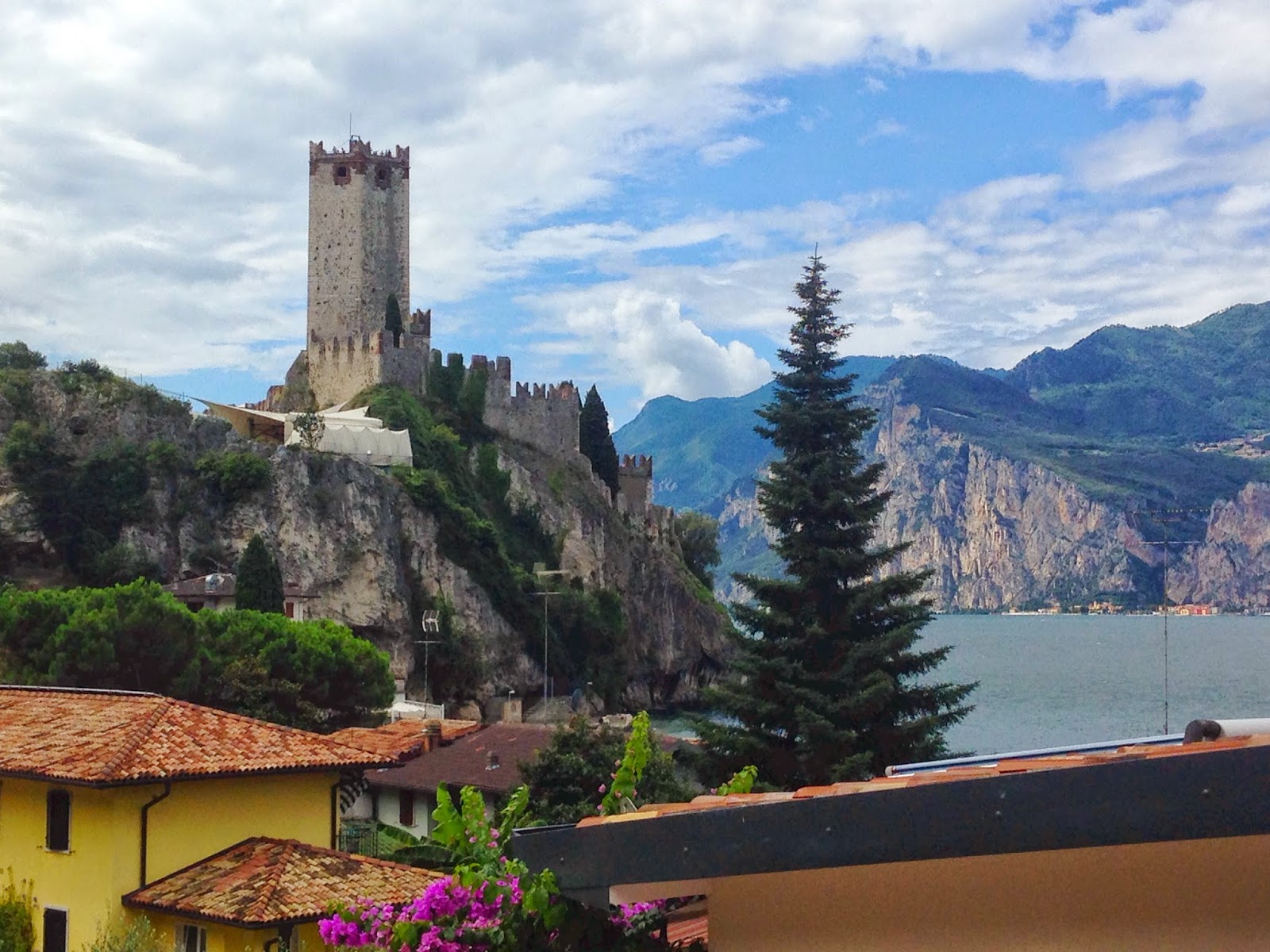 Arco was our last stop before heading in to the Italian Alps, and I not only met some local climbers, but I got a quick hike in to yet another castle (Italy is riddled with them).  The photo above is the view from our (delicious) lunch!)
In Arco itself, we hiked up to another castle... 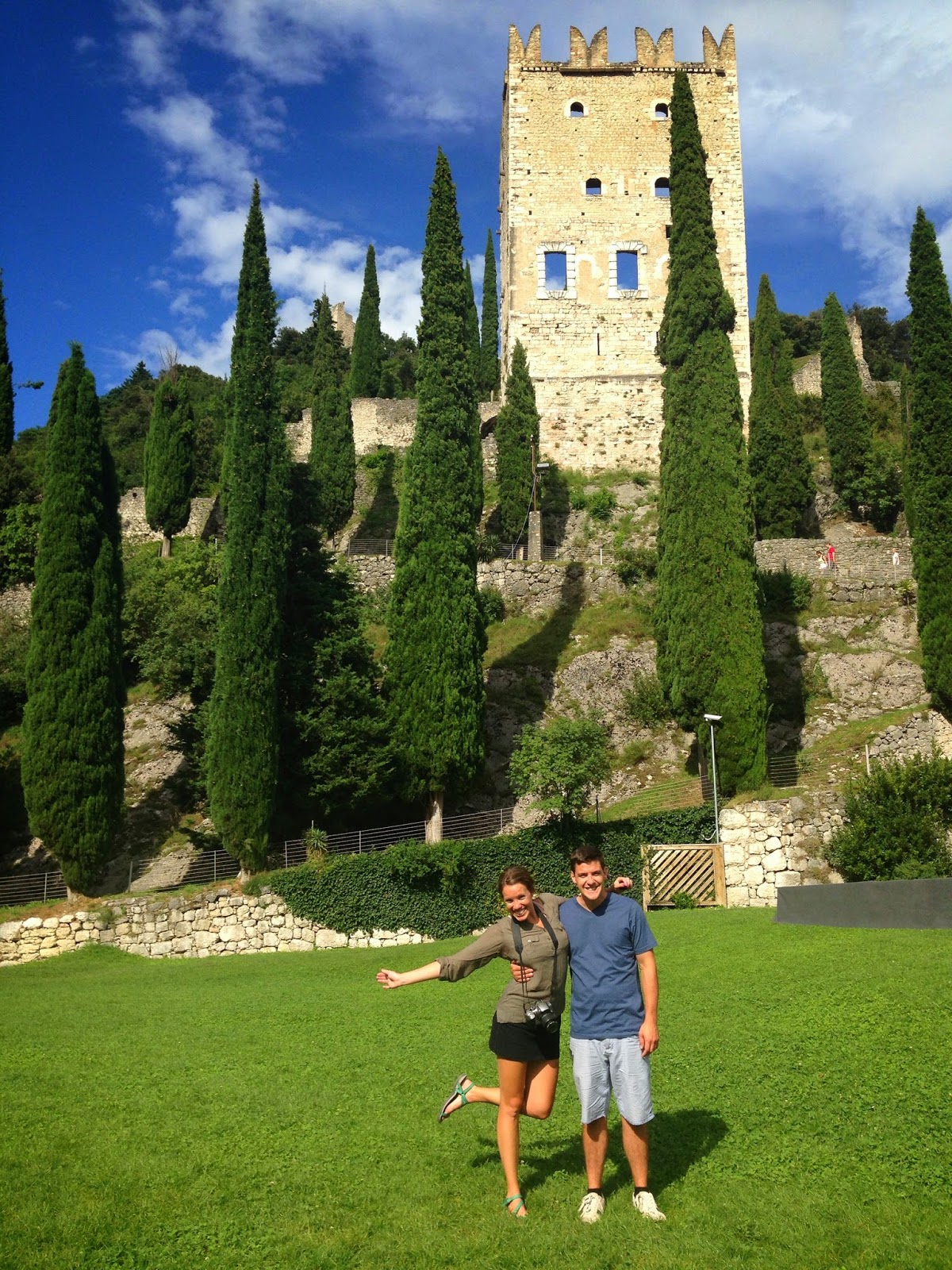 where Kyle and Kendra were (of course) super cute!
Despite not really being able to climb in Arco, it was fantastic to see the mountains around me as we started into the Dolomites, and I filed the area away for future reference when I finally get back there to climb! 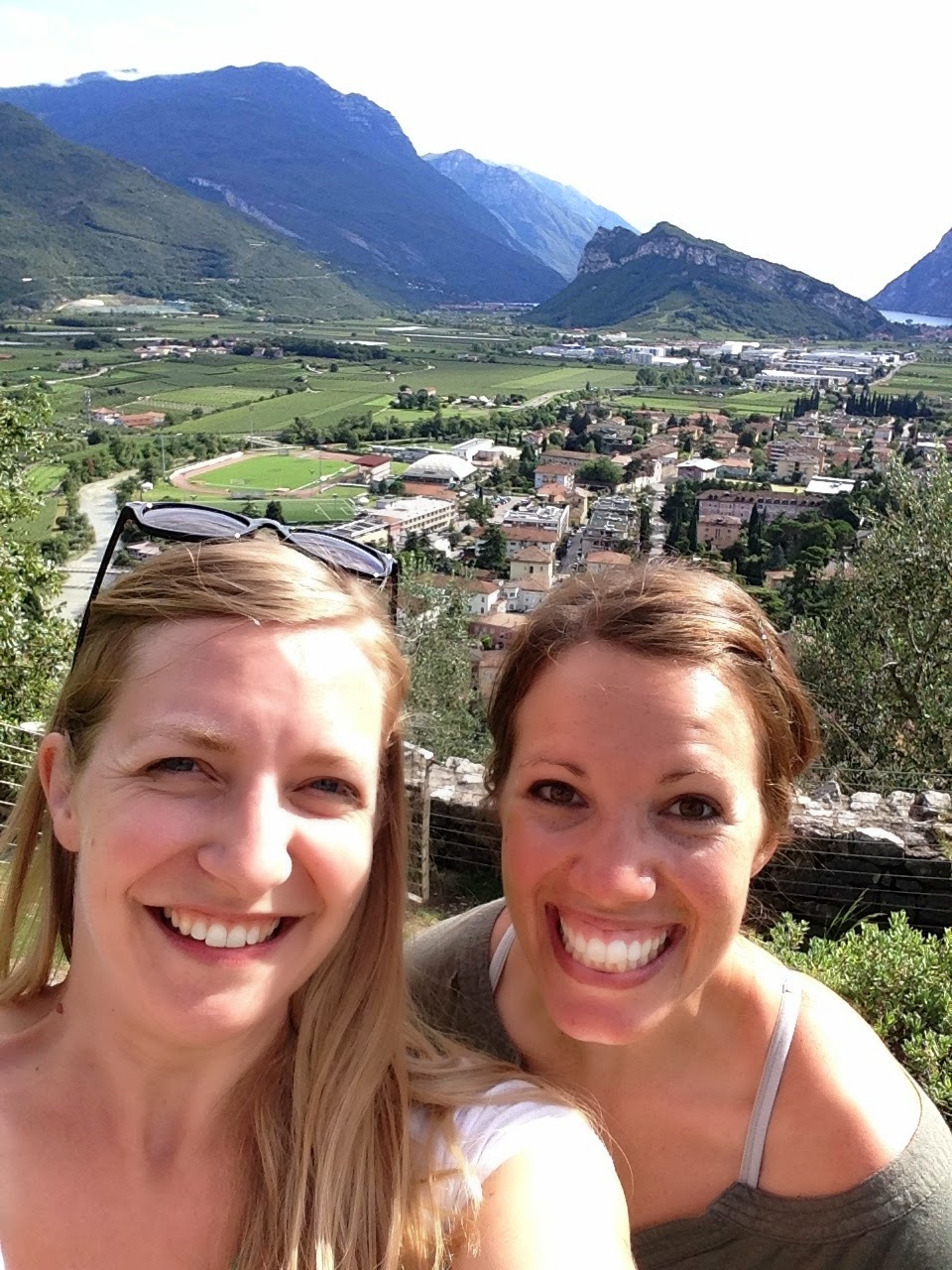 Gorgeous area!  Next up, the Italian Dolomites...
Posted by Katie at 8:42 PM

I still can't decide whether Marcello's spinach/ricotta tortellini was better than his Macaroni that was unlike any I'd ever had, but getting both options to try every time we couldn't decide was quite fortuitous. Parsely/pesto potato cakes were quite yummy. I certainly buy into the separate dessert stomach theory :-)

Good to see a reference to reading Shakespeare in your blog, given the blog's name. Too bad we could not see the huge medieval library at Bobbio's Monastery that inspired Umberto Eco's "Name of the Rose."